“Keyboardist Jason Fuller was in fine form the entire show, proving throughout the afternoon that he is a world-class talent..."  –Honest Tune Magazine

“Jason Fuller is one hot keyboard player...Jason is one of those natural players who is so totally musical his amazing technique flows like fine wine, calling attention to itself until you realize that damn few fingers have that kind of control.  And he's no scene stealer.  His smoking talent blends into the mix, elevating the sound way beyond bar band...”  –Key West The Newspaper

“Jason Fuller is without a doubt one of the more talented musicians in Athens, a town plumb thick with hot players. In terms of pure talent, the boy can flat play that piano (or organ or keyboards or whatever). He's also one of the most versatile, able to leap from barrelhouse boogie to nasty New Orleans swing to rollicking honky tonk to tasty jazz. He's also one of the busiest: since coming to Athens in 1996, Fuller has played with more bands than most folks have seen and by his own admission he's loved every minute of it.”  –Flagpole Magazine

“Few musicians epitomize the living spirit of music that is Athens more than Jason Fuller. Athens' resident Piano Man, Fuller's resume includes stints with dozens of bands. Fuller can frequently be seen playing with just about everyone in Athens, including Tishamingo and the Kinchafoonee Cowboys, even singing the "Bobby" (Weir) role in the Grateful Dead cover band Cosmic Charlie. He organized the Santana Tribute, featuring Hester, Owens, A.J. Adams, Deane Quinter, Clarence Cameron, and Sunny Ortiz, a show that is commonly regarded as one of Athens finest live performances of the new millennium. Fuller currently fronts King Daddy Conspiracy, showcasing his talents as a band leader extraordinaire.”  –Fred Adams (Owner at Honest Tune Magazine)

"Magnolias, Athens' only piano bar, will awaken tonight with the fingertip mastery of Athens native, Jason Fuller.  Fuller is not the average piano player."  -The Red & Black 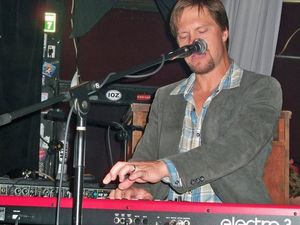